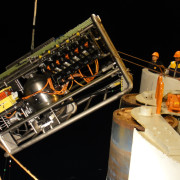 27 Apr 2015: In the early morning of 27th April 2015, the first node of the seafloor network at the KM3NeT-Fr site was successfully installed. This is again an important step in the realisation of the KM3NeT neutrino telescope. During this April campaign, the node was connected to the 40 km long electro-optical cable which connects the network to the shore station. This cable was already deployed during the December campaign of last year.The heart of the node is an egg-shaped titanium vessel with electronics and photonics and sufficient sockets to plug in the cables coming from the many detection units to be anchored on the seabed. The first detection unit is expected to be connected later this year.