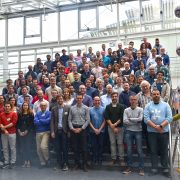 KM3NeT is a Collaboration of institutes and university groups, which have joined together to build and operate the KM3NeT neutrino telescopes and to analyse the data recorded. Commitments and rules of conduct are defined in a formal Memorandum of Understanding, signed by the funding authorities of the institutes or groups.

An institutes or university group can join the KM3NeT Collaboration as full member or as Observer. The latter is defined by KM3NeT to allow new groups  to already meaningfully collaborate in KM3NeT even though their resources may initially preclude full membership.

An institute  or group wishing to join the Collaboration should contact the KM3NeT Spokesperson to express its interest.