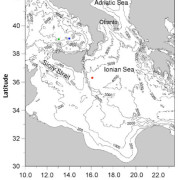 The KM3NeT-It deep-sea installation site is located at 36°16’ N 16°06’ E about 100 km off-shore Portopalo di Capo Passero, Sicily, Italy, where the shore station is located. The site is the former NEMO site and is shared with the EMSO facility for Earth and sea science research. The first phase of the KM3NeT-It Installation Site is financed through Sicilian PON funding. The seafloor network has the star geometry with a main electro-optical cable (MEOC) to shore with 20 fibres and two Secondary Junction Boxes (SJBs) for connection of in total 24 Detection Units, 4 calibration lines and one instrumentation line. The shore infrastructure comprises facilities to power the subsea detectors and a shore station with a control room. The shore station comprises the same facilities as that for KM3NeT-Fr. 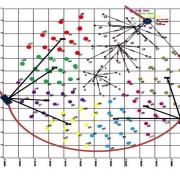 At a depth of about 3500 m, the existing high-speed electro-optical network of NEMO has been upgraded for the connection of KM3NeT detection units and the transmission of KM3NeT data and detector control commands between the deep sea and the computers in the shore station. The deep-sea network is being build with separate compartments each with the capacity to connect a detector building block of 115 detection units to shore. A first 100 km long electro-optical cable to shore is already in place.The topology of each network compartment (or detector building block) is that of a star-network. The secondary junction boxes of ‘stars’ of 12 detection units are connected to the primary junction of the building block located at the end of its cable to shore. Each compartment will provide a separate node for connection of instrumentation for Earth and marine science research. 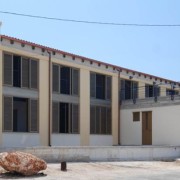 The main cable of each detector building block will end in the shore station in Portopalo di Capo Passero which is located close to the shore line. It is an old wine warehouse, reconstructed to contain computer- and networkfacilities to operate the detectors in the deep sea. The shore station also contains a workshop and facilities for the shift crew. The computers in the shore station are connected via public internet to the central data repository centres of KM3NeT.

The modular design of KM3NeT as a network of detector building blocks makes it possible to gradually extend the infrastructure to its final capacity. During implementation, data taking can already start. In the morning of 20th July 2015, the first step of the upgrade of the deep-sea infrastructure of KM3NeT-It was successfully concluded. During a sea campaign that started three days earlier the old termination frame at the deep sea end of the 100 km long main cable to shore was replaced by a new one and two junction boxes (for the first two ‘stars’ of detection units) were installed. After one year of operation, the deep-sea network needed an update. This was implemented in 2018. The first phase of the infrastructure of the KM3NeT-It Installation Site will allow for connection of 3 network stars with a total of 24 detection units. 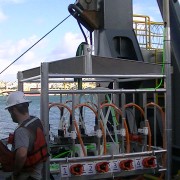