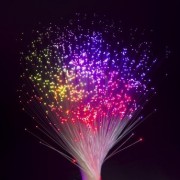 The KM3NeT detectors are operated from shore stations at the different Research Infrastructures that house all the necessary power, computing and technical infrastructure. The detectors themselves can be operated from everywhere in the world, with a small technical support team at the shore stations. The KM3NeT fibre-optic data transmission system allows for both, transfering all the data from the detector (scientific and monitoring data) to the shore station and transferring the detector control commands to the detector. The bandwidth per sensor module is 1 Gb/s abundant for a typical used bandwidth of ~20 Mb/s per sensor module which is mainly produced by the light emission of radio-active potassium decay (inducing 5-8 kHz rates per photomultiplier tube).  The timing synchronisation is such that the time offsets between any pair of sensor modules are stable within 1 ns, ensured by a modified white rabbit protocol (external link). Individual control for each sensor module, for each base of a detection unit and the slow control for the junction boxes at the seabed is provided. The slow-control system is implemented via a broadcast mechanism (same as that of the clock).

The readout of the KM3NeT detector is based on a concept in which all digital data from the photomultiplier tubes that pass a preset threshold (typically the equivalent of 0.3 photoelectrons) are sent to shore where they are processed on a computing cluster in real time. The physics events are filtered from the background using a set of specific filter algorithms implemented in software. Different filters can be applied to the data simultaneously. Since the total data rate for a single building block made of 115 strings amounts to about 25 Gb/s, a reduction of the data rate by a factor of about 104 is required to store the filtered data on disk for further processing – including calibration, reconstruction of event parameters (type, direction and energy) and analysis. In parallel to the optical data, the data from the acoustics positioning system are processed allowing to monitor the position of each detection element down to around 10cm. This is part of the KM3NeT calibration system.