KM3NeT aims at two major scientific goals: the discovery and observation of high-energy neutrino sources in the Universe and the determination of the relative masses of the neutrinos, referred to as the neutrino mass hierarchy.

The discovery of a flux of very energetic cosmic neutrinos reported by IceCube represents de facto the birth of the neutrino astronomy. Many questions arose about the origin of the observed cosmic neutrinos – do they come from sources in our galaxy or do they have an extragalactic origin, can these sources be localised and are they point-like or not?  Other questions concern the energy spectrum and the flavour composition of the flux. As a consequence of this discovery,  the importance of building a cubic kilometre (km3) scale high-energy neutrino telescope in the northern hemisphere became even more strong and led to the definition of the next phase in construction of the KM3NeT infrastructure with the ARCA telescope dedicated to the search for very high-energy cosmic neutrinos. Thanks to its location in the Mediterranean Sea, the ARCA telescope provides a coverage of 87% of the neutrino sky and allows a survey of almost the whole galaxy including the Galactic Center. 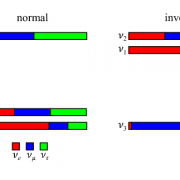 An other goal of the KM3NeT scientists is to study the properties of the neutrino particles themselves. The sizable contribution of electron neutrino to the third neutrino mass eigenstate  as reported by Daya Bay, Reno and other experiments paved the way for the determination of the neutrino mass hierarchy that is one of the last neutrino properties to be measured. The design of the  ORCA  detector of KM3NeT  is optimised for the study of neutrinos created by cosmic rays in the Earth’s atmosphere.

Together, the ARCA neutrino telescope and the ORCA neutrino detector of the KM3NeT research infrastructure offer the scientists the unique possibility of performing both all flavour neutrino astroparticle physics and also to advance fundamental neutrino particle physics.