The latest representation of reconstructed muons in the ORCA6 detector. 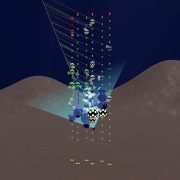 Visualisation of a muon particle travelling close to two detection units of the KM3NeT/ARCA detector and generating light in the optical modules.  The light recorded by the optical modules in the detection units is made visible as spheres with a size that reflects the amount of light collected and a colour that represents the arrival time of the light on the module: red is earlier than blue. The path of the muon particle that travels from above is reconstructed from this information and  is made visible as the blue line.

A different – more detailed – visualisation, again of a muon travelling downwards, this time travelling close to the KM3NeT/ORCA detector. This time the light recorded by each of the 558 photomultiplier tubes in the 18 optical modules is visualised. Again, the colour indicated the time of arrival of the light on the tubes, this time colour code: yellow is earlier than green then blue then red. The cone represents the direction from where the light came, the length of the cone the intensity of the light. The event below is recorded and reconstructed a few hours after the detection unit was deployed in the deep-sea and connected via the deep-sea network to the shore station on land.

The visualisation of a simulated event in the KM3NeT/ORCA detector.