The deep-sea networks of KM3NET are complex systems of electro-optical cables and optical fibre components. They provide connection between the sensors in the deep sea and the control room in the shore station. They facilitate the distribution – from the shore to the detection units anchored in the deep sea – of electrical power and control commands for operation and – from the deep sea back to the control room – the response to the commands and the measured signals. 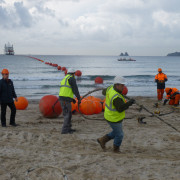 The detection units are connected to junction boxes at the sea bed and equipped with several connectors, each of which can power several daisy chained units in series. One channel on the junction box is dedicated to Earth and Sea science sensors.The underwater connection of the units to the junction boxes is via interlink cables running along the seabed. A main electro-optical cable connects the underwater detector to the shore station providing power and allowing the transmission of information from sea to shore (data) and viceversa (control). The KM3NeT fibre-optic network makes use of Dense Wavelength Division Multiplexing. This method allows for signals of many different carrier frequencies to pass through a single fibre. In KM3NeT each sensor module of a set of four detection units transmits its data using its own unique carrier frequency. At the bottom of the string detection unit 18 frequencies are “loaded” into one fibre. Further in the network these “loaded” fibres come together and are further concentrated into a single fibre carrying 72 frequencies. These fibres run the maximum of 100 km to the shore, where the frequencies are separated again. In this way each sensor module has its own unique path to shore.

On shore the data from the full detector can be collected together and analysed for the traces of the subatomic particles that passed through the detector.

Two deep-sea networks are under construction at the KM3NeT-Fr site and KM3Net-It site respectively.