What is the Universe made of? Where do the high-energy cosmic particles impinging the Earth’s atmosphere come from? How have they gained such a high energy, much higher than what man-made accelerators can produce? Can atmospheric neutrinos provide more information on neutrino properties? Scientists of KM3NeT are seeking answers using a network of neutrino detectors in the abyss of the Mediterranean Sea. 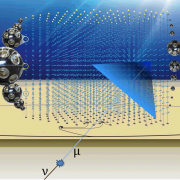 KM3NeT is the future European deep-sea research infrastructure hosting new generation neutrino detectors located at the bottom of the deep seas of the Mediterranean. The ARCA detectors of KM3NeT will form a telescope that scientists will use to search for neutrinos from distant astrophysical sources in our Universe, like supernovae, gamma ray bursters or colliding stars. The ORCA detector of KM3NeT will be dedicated to the study of the properties of the high-energetic neutrino particles themselves. At the bottom of the Mediterranean Sea, several arrays of thousands of optical sensors will detect the faint light from charged particles created in the reactions of cosmic or atmospheric neutrinos with the water inside or close to the detector volumes in the deep sea. Several cubic kilometres – km3 – of sea water will be instrumented forming a Neutrino Telescope of unprecedented size: KM3NeT. The facility will offer marine and Earth scientists the unique opportunity to house their instrumentation for long term and on-line monitoring of the deep-sea environment and the sea bottom at depths of several kilometers close to the South coasts of Europe.

The realisation of the KM3NeT infrastructure will proceed in phases adjusting to the amount of funding available. The first phase of construction has started in 2015. For this, the participating funding authorities have signed a Memorandum of Understanding for Collaboration in the implementation of KM3NeT-phase1. For the next phase of KM3NeT 2.0 a Letter of Intent has been published. Currently, the full implementation of the KM3NeT 2.0 configuration described in the Letter of Intent is partially funded. Beyond KM3NeT 2.0, the construction will include an extension of the detectors to several cubic kilometres, required for efficient detection of the neutrinos that are so shy to interact that huge detection volumes are required. The required large detection volumes explain the choice for instrumenting the abundant natural waters of the Mediterranean.