Code of Conduct and Ethical behaviour

Home » About KM3NeT » Code of Conduct and Ethical behaviour 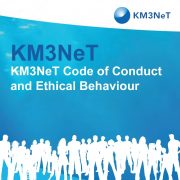 The scientific objectives of the KM3NeT Collaboration are the search for and observation of sources in the Universe of high-energy cosmic neutrinos and the measurement of characteristics of neutrinos generated in the Earth’s atmosphere. For this the Collaboration is building a network of neutrino detectors at the bottom of the Mediterranean Sea. At the same locations, the network also provides nodes for connection of instruments for Earth and Sea science studies. Building the detectors with instrumented volumes of up to several cubic kilometres will take several years. Scientific analyses of the recorded data are conducted under the supervision of the Collaboration; after a few years, the data will be made available to others as described in the KM3NeT data dissemination plan.

The scientists and engineers in the KM3NeT Collaboration that have come together because they share the scientific interest, come from different backgrounds, cultures and countries. This diversity is considered a strength of the Collaboration and a basis for high-quality research. To nurture the diversity the Collaboration has developed a Code of Conduct and Ethical behaviour built on a set of shared values and describing rules of good conduct.

The formal rules for Collaboration are described in a Memorandum of Understanding (MoU) signed by the funding authorities of the institutes employing the people participating in the KM3NeT Collaboration.

The Code describes the internal values of the Collaboration. It serves as a guide for scientific integrity as well as for decent behaviour in the working environment of KM3NeT. In the Code, a summary of internal values of KM3NeT is presented followed by rules of conduct illustrating the values.

A quick introduction can be found here.