Liveblogs during sea campaigns for ARCA

22 November 2022 – After 4 years of  activities carried out by the Italian funding agency INFN and Alcatel Submarine Networks, part of Nokia, the new subsea network for KM3NeT ARCA, funded under the Idmar regional project in Italy, is now complete.

The new system comprises a 100 km long electro-optical cable, equipped with 48 optical fibres for detector control and data communication and two electrical conductors for power distribution, connected to the shore station control and power feeding equipment, that can deliver up to 80 kW offshore. The cable is bifurcated in order to serve the two building blocks foreseen in ARCA.

During a 10 days long sea operation, which ended on November 17th, a cable termination frame (CTF) was installed on the northern branch of the cable. To this purpose the end of the cable, which was deployed already in 2020, was recovered from the sea floor and connected to the CTF onboard the deployment ship – the Ile d’Ouessant of Alcatel Submarine Networks. Then the CTF was carefully deployed to the target position on the sea floor. Extensive tests were done before and after the deployment to ensure its nominal behaviour.

The CTF is a large-size, 12-ton component which is equipped with four medium voltage converters and a total of 16 electrical and optical subsea connectors for connecting a set of submarine junction boxes to which the detection units will be in turn connected.

With this installation the connectivity and power transmission capabilities of the network have been increased by a factor four compared to the first part of the network, used to run the set of junction boxes and the first 30 detection units of ARCA Phase 1. This will allow for the completion of the construction of the first building block of ARCA and prepares the field for the installation of a second CTF on the other branch of the cable for the second building block.

12 September 2022 – New sea campaigns were performed last week for both ARCA and ORCA. The purpose was to prepare the field for next installation phases of the detectors as well as to deploy new detection units and acoustic beacons – the latter are autonomous calibration devices which run on batteries and need to be replaced after some time.

The number of detection units in operation in the deep sea has been increased to 32 (comprising almost 18,000 photomultipliers): 21 in ARCA and 11 in ORCA.

After installation of a third junction box at the ARCA site, this site is now fully equipped for hosting the so-called Phase-1 of the project, comprising the first 31 detection units and the calibration unit of the apparatus.

The ARCA sea campaign represented the final action of the IDMAR project in Italy, supported by Regione Sicilia.

These operations were made possible by the dedication of hardware teams and the onshore and offshore teams at the two sites – the Collaboration is very grateful to them. 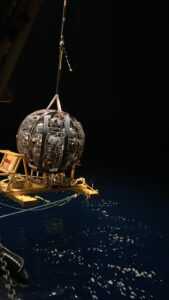 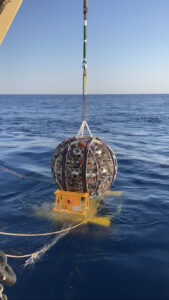 Activities at sea being resumed at the ARCA site

11 June 2022 – Due to the adverse weather conditions of the last days, the schedule of the sea campaign had to be redefined.

Here is the updated plan:

Good luck to our offshore and onshore teams!

6 June 2022 – The first round of activities of the ongoing sea campaign at ARCA has been completed.

In a summary, in the past week-end:

Each of the steps above comprised dedicated tests, requiring careful coordination of the activities of the onshore and offshore teams.

And… the campaign is not yet finished! The ship is now heading back to Malta to load an additional set of detection units to install.

Stay tuned, as there will be more to report in the next days!

The first detection unit installed in this campaign gracefully splashes into the water, to start its journey down to 3,500 m depth.

3 June 2022 – A new sea operation was started yesterday aiming at a significant enlargement of the ARCA neutrino telescope.

This is a major step forward for the Collaboration, as this is the first time ever that we launch a 2-weeks campaign. The scope of the operation in fact is twofold: upgrade the submarine network, by installing 2 brand-new junction boxes in replacement of the junction box that we have been operating so far, and to install new detection units (DUs). The operation will therefore take place in two steps: after the first round of activities for installation of the junction boxes and the first 4 DUs, the ship will come back to shore to pick up an additional set of DUs.

Handin Tide, which has already performed the previous sea campaign for KM3NeT ARCA last year, is the ship which will conduct this operation.

The ship left the port of Malta yesterday afternoon.

Remain connected, as we will be posting news about the operation while the action goes on – on our blog and on our social channels. 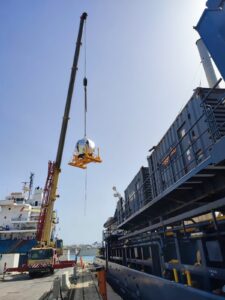 Loading of a KM3NeT DU onto the Handin Tide.

15 September 2021 – after the recovery of two old detection units, already left disconnected after previous sea campaigns – the so-called PPM-DU (Pre-Production Model of Detection Unit), a 3-digital optical module unit used for qualification of the project in the sea as early as in 2014, and one of the first prototype full-size detection units deployed in spring 2016, the sea campaign of ARCA has been completed today.

A lot of good work has been done in this intense week – and we are very grateful for that to the onshore and offshore teams. We also thank all the various institutes which contributed to the construction and preparation to deployment of the detection units – in next entries on this blog we will report on these demanding activities.

As a summary, during this sea campaign:

After completing this set of operations, Handin Tide safely sailed back to the port of Malta.

Note that it was decided not to install the remaining two detection units which were onboard the ship, due to a mechanical issue that will be solved. These two detection units have been taken back to shore. After adequate refurbishment, they will be added to those already in preparation. Nothing is lost therefore: they will be included in the next sea campaign.

In the end… it’s time to resume detector operation of ARCA now!

After unfurling, the deployment vehicle is recovered from the ship, to be reused for next deployments.

The status at the moment is that all interlink cables have been layed down on the sea floor and two detection units have been deployed and connected to the junction box. The detection units are still furled on their launcher vehicles; they will be allowed to unfurl tomorrow – since the launcher vehicle has to be recovered from the ship after it reaches the surface, it is better to perform this operation in the daylight.

Pre-unfurling functional tests performed from the onshore control station show that those first two detection units are in good order.

Deployments of the next detection units will continue during the night.

12 September 2021 – there has been good progress in the operation so far!

The two cable reels are also deployed. The cables for connecting four detection units are already layed on the sea bottom and connected to the junction box. There is only one cable left to install.

While proceeding with these activities, however, the weather conditions worsened. The sky was still sunny, but waves mounted high: “We have a lot of sun here, but we are dancing a lot” commented Daniele Vivolo, who is among the KM3NeT team onboard the ship.

In such situation the risks when putting the equipment in water increase significantly. It was therefore decided to put the operation on hold, waiting for an improvement of the sea state.

In late afternoon, the sea had calmed down significantly, and the operations were resumed.

As we write this post, the first detection unit of the set of five included in this campaign is already in water, travelling into the deep, dark sea, down to 3,500 meters depth. There it will meet the ROV (the submarine vehicle operated from the ship), which will take care of the next steps: to assist in carefully positioning the detection unit on the sea bottom and to connect it to the cable already in place. Have a safe trip!

In the movie: the first detection unit is prepared for deployment.