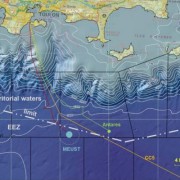 The KM3NeT-Fr deep sea installation site is located at 42°48’ N 06°02’ E about 40 km off-shore Toulon, France. It is located at a depth of about 2450 m and about 10 km west of the ANTARES  neutrino telescope – the predecessor of KM3NeT. The shore station is located at the Institute Michel Pacha at La Seyne sur Mer. The location of both the ANTARES and KM3NeT-Fr (MEUST) site are visible in the picture of the map of the Mediterranean south of Toulon France. 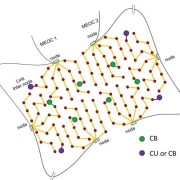 A high-speed electro-optical network is installed on the seabed to provide power and data transmission to/from the infrastructure. The infrastructure is connected to shore via two main electro-optic cables (MEOCs). Each MEOC supplies three nodes and each node hosts eight user ports. In the baseline design, four KM3NeT detection units are daisy chained together and at least five chains are connected to each node. On each node a single user port can host earth and sea science sensors. The KM3NeT-Fr site will host the ORCA detector for particle physics. 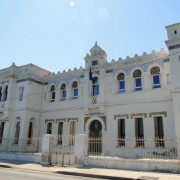 The two MEOCs are connected to a power station at the Les Sablettes beach of La Seyne sur Mer. From there a land cable runs to the shore-station at the Institut Michel Pacha. In the shore station dedicated software running on a PC farm filters the data and applies a first selection and event reconstruction. The selected data are transmitted via a 10 GB/s link to the KM3NeT data repository at the computing centre in Lyon.
It is foreseen that in the future the shore station will be relocated to a new CNRS institute on the Ifremer campus at La Seyne sur Mer.

The first phase of the KM3NeT-Fr seabed infrastructure will comprise a single main electro-optic cable to shore, one node, six KM3NeT/ORCA-style detection units and a single line hosting a variety of oceanographic sensors
In December 2014, the main electro-optical cable was deployed. In 2017, a redesign of the cable by Arcatel appeared to be necessary to adjust to the fact that at KM3NeT-Fr AC-power is used in stead of DC-power. End of 2018, the new cable was installed. In January 2019, the first ORCA detection unit was connected to the new cable.