ARCA is growing up 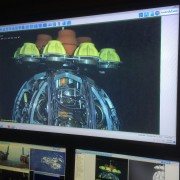 16 May 2016 – During a five day sea campaign last week, two detection units for ARCA were deployed at the Italian KM3NeT site. On board the Ambrosius Tide, the detection units arrived from the harbour of Malta at the KM3NeT-It  site, 80 km off-shore the South-East of Sicily. After a survey of the area and inspection of the deep-sea infrastructure, the units were deployed at their pre-defined locations. With a speed of about 12 meter per minute, the descent of a unit from the sea surface to touch-down at a depth of 3500 meter took about 4.5 hours.

The detection units were connected to the deep sea network through junction boxes in the cable system. Their connectivity was confirmed by the crew at the shore-station and then the units unfurled to their full height. The full operation was supported by a ROV, a remotely operated robotic vehicle with camera vision. In the same campaign, a tower  – equipped with 84 large PMTs – was also deployed and connected. Now, the shift crew on shore has taken over performing operational tests with the detection units.

Check out our YouTube KM3NeT channel for video impressions. 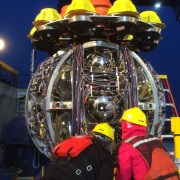 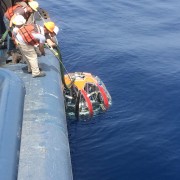 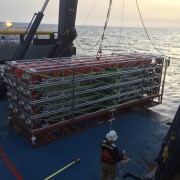