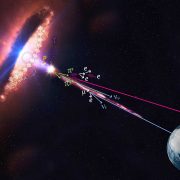 KM3NeT congratulates the researchers of the IceCube Collaboration for their compelling evidence for high-energy neutrinos originating from blazar TXS 0506+056.

On 22 September 2017, the IceCube neutrino telescope detected a high-energy neutrino of about 290 TeV passing through the deep South Pole ice. When a series of gamma-ray telescopes looked at the same location in the sky they identified a blazar, TXS 0506+056, which happened to be flaring at that moment. In addition, IceCube found an excess of high-energy neutrino events with respect to atmospheric backgrounds at that location between September 2014 and March 2015. Details of the IceCube results can be found at their website.

The ANTARES neutrino telescope in the deep Mediterranean Sea followed up the initial IceCube real-time alert, but no time coincident events were found. However, a time integrated search during the period 2007-2017, did yield a small excess of neutrinos in that direction. Have a look at their website for details.

The first identification of an astrophysical source of high-energy neutrinos represents an important step forward for the fledgling field of multi-messenger astronomy. With its unprecedented angular resolution and complementary field of view, KM3NeT looks forward to soon joining IceCube and ANTARES in the hunt for the enigmatic sources of cosmic neutrinos. Exciting times are ahead of us!

In this artistic rendering, a blazar is accelerating protons that produce pions, which produce neutrinos and gamma rays. Neutrinos are always the result of a hadronic reaction such as the one displayed here. Gamma rays can be produced in both hadronic and electromagnetic interactions.