ANTARES is the first operational neutrino telescope in the Mediterranean Sea. It is located close to the KM3NeT-Fr site, off-shore Toulon, France. Since its completion in 2008, the telescope is continuously taking data and has published many results. It is one of the three pilot projects preceding the design of the KM3NeT Research Infrastructure. The other two pilot projects were NEMO, off-shore Sicily, Italy and NESTOR off-shore Pylos, Greece. The KM3NeT-It is located at the former NEMO site. The former NESTOR site is considered for KM3NeT-Gr. 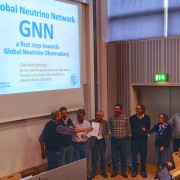 KM3NeT is part of the Global Neutrino Network (GNN) that aims for a closer collaboration and a coherent strategy among the neutrino telescope projects.

At present, it consists of the  ANTARES, Baikal-GVD, IceCube, KM3NeT Collaborations.

GNN aims to develop a coherent strategy and to exploit the synergistic effects of cooperation. It will serve as a forum for formalizing and further developing the present annual Mediterranean-Antarctic Neutrino Telescope Symposium (MANTS) meetings and biannual international workshop on Very Large Volume Neutrino Telescopes (VLVNT).  Goals of GNN include the coordination of alert and multi-messenger policies, exchange and mutual checks of software,  creation of a common software pool, establishing a common legacy of public documents, developing standards for data representation, cross-checks of results with different systematics, the organization of schools, and  other forms of exchanging expertise, e.g. through mutual working visits of scientists and engineers or by forming ad-hoc advisory committees of members of the four participating collaborations.

In Februray 2006, the Design Study for the infrastructure, funded by the EU FP6 framework, started.

The combination of the relatively low flux of high energy cosmic neutrinos and their weak interaction with matter implies the need for a very massive detector.
The solution pursued is to instrument a large volue of deep-sea water with a three-dimensional array of photo-sensors detecting the weak Cherenkov light produced by charged particles emerging from neutrino interactions in the water or the seabed. In order to suppress daylight and background from muons produced in cosmic ray interactions in the Earth’s atmosphere, the telescope must be operated at depths of several kilometres.

In designing a detector to be placed at the bottom of an ocean there are several difficulties that must be addressed: (1) The ambient hydrostatic pressure; (2) The corrosive environment of the seawater; (3) The distance from shore for the communication; (4) The force on the structure due to the sea currents; (5) The backgrounds due to downward going muons; (6) The backgrounds due to 40K decay. For the physical process of detecting neutrinos from sources near the Galactic centre there are additional requirements (a) optimal angular resolution of the reconstructed muon; combined with (b) a large sensitive area facing the Galactic centre.

During the Design Study these issues were addressed and technical innovations led to a design that will allow for networked neutrino telescope with an instrumented volume of more than 5 cubic kilometres for the targeted budget of 200 MEuro. A volume, more than a factor 5 larger than foreseen at the start of the design study for the same budget.

The Design Study was concluded in December 2009 with the internal approval of the Technical Design Report, which has been made public in March 2010 ( Part 1, Part 2, Part 3).

In March 2008 the Preparatory Phase of KM3NeT infrastructure started, funded by the EU FP7 framework.
The primary objective of the KM3NeT Preparatory Phase was to pave the path to political and scientific convergence on the legal, governance, financial engineering and siting aspects of the infrastructure and to prepare rapid and efficient construction once approved.
As had become apparent in the KM3NeT Design Study, reconciliation of national and regional political and financial priorities with scientific and technological considerations became a major issue.

In 2010, the KM3NeT consortium defined the technology of the research infrastructure following the Technical Design Report and concluding validation tests conducted after.

The KM3NeT Preparatory Phase has been formally concluded in February 2012. Due to delays in the in-situ validation program which required timely availability of deployment vessels and ROVs, the final Pre-Production Model of the major components were delivered in 2012-2014.

EMSO is a large-scale European Research Infrastructure in the field of environmental sciences. EMSO is based on a European-scale distributed research infrastructure of seafloor and water column observatories; with the basic scientific objective of long-term monitoring, mainly in real-time, of environmental processes related to the interaction between the geosphere, biosphere, and hydrosphere, including natural hazards. It is composed of several deep-seafloor observatories and shallow water test sites, which will be deployed on specific sites around European waters, reaching from the Arctic to the Black Sea passing through the Mediterranean Sea, thus forming a widely distributed pan-European infrastructure.

The Astronomy ESFRI and Research Infrastructure Cluster, ASTERICS, is a €15 million Research Infrastructure funded by the European Commission‘s Horizon 2020 framework. ASTERICS aims to address the cross-cutting synergies and common challenges shared by the various Astronomy ESFRI facilities (SKA, CTA, KM3NeT & E-ELT). It brings together for the first time, the astronomy, astrophysics and particle astrophysics communities, in addition to other related research infrastructures. The major objectives of ASTERICS are to support and accelerate the implementation of the ESFRI telescopes, to enhance their performance beyond the current state-of-the-art, and to see them interoperate as an integrated, multi-wavelength and multi-messenger facility.