KM3NeT-It – Upgrade of the deep-sea infrastructure 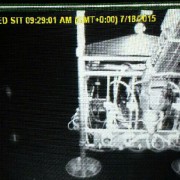 20 Jul 2015: In the morning of 20th July 2015, an important upgrade of the deep-sea infrastructure of KM3NeT-It was successfully concluded. During a sea campaign that started three days earlier the old termination frame at the deep sea end of the 100 km long main cable to shore was replaced by a new one and two junction boxes were installed. This major upgrade of the seafloor network at a depth of 3500 m was necessary to allow for the installation of a large number of detection units of the KM3NeT telescope. The first detection units are expected to be connected to the new junction boxes later this year.