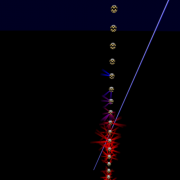 29 January 2019 – KM3NeT had a good start of 2019. Data taking of the first detection unit of ARCA could be resumed, after the operation of the unit had to be stopped in 2017, because of a fault in the seafloor cable network. Thanks to a fix of the network early January, the ARCA unit is operational again and data taking runs smoothly since. The first events could be reconstructed immediately after switch-on. This first ARCA detection unit was installed on 3 December 2015 and has been operational until data-taking had to be halted in 2017. It remained unattended in the deep sea for more than a year and celebrated last December its 3rd anniversary at its location at a depth of 3400 m without any ceremony. KM3NeT is happy the unit is back into operation again.

Below, screenshots of the computers in the shore station at Porto Palo di Capo Passero during installation of the unit in 2015. Above: the first reconstructed event after resuming data taking in 2019. 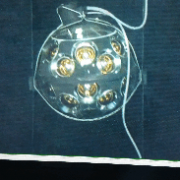