Exciting deployment on the ARCA site!

15 April 2021 – During the last few weeks – despite the pandemic – the KM3NeT Collaboration worked hard to make five new detection units for ARCA ready for deployment. Spooled on their launching vehicles they arrived at the harbour of Malta where a team of KM3NeT technicians, engineers, and scientists inspected thoroughly the units for the last time before they were loaded onto the Miss Marilene Tide of the FUGRO company. In the early morning of 8th April the ship sailed out toward the IDMAR site of ARCA near Sicily for an amazing sea operation. After installing several new components for the seafloor network, on Monday 12 April the deployment of the five new detection units began. 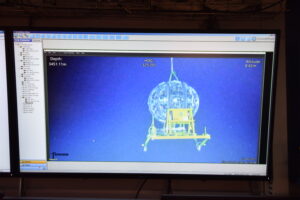 Detection unit approaching touch down at the seabed, 3500 m deep. 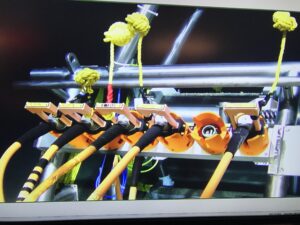 Junction box at the seabed with the plugs of five detection units.

Located in the Mediterranean Sea at a depth of 3,500 m about 80 km offshore Capo Passero, Sicily, the ARCA telescope together with its sister telescope ORCA, located offshore Toulon, France will allow scientists to identify the sources of high-energy cosmic neutrinos emanating from cataclysmic events in the Universe and to study the fundamental properties of the elusive neutrino.

Once complete, the KM3NeT/ARCA detector will form an array of more than two hundred detection units. Each of the 700 m tall units comprises 18 optical modules equipped with ultra-sensitive light sensors that register the faint flashes of light generated by neutrino interactions in the pitch-black abyss of the Mediterranean Sea.

The journey of our new detection units started earlier this month where, after being assembled and prepared for deployment, they left the labs in Catania and Naples on the ferry for Malta. The detection units represent the output of a construction effort distributed over many institutes of the Collaboration.

It took only two days to deploy, test and connect the five new units to the seafloor network. They add to the first detection unit of the apparatus, deployed as early as 2015. In the control room in Capo Passero the first data after connection were recorded immediately. An amazing sea operation came thus to an end, marking a big step for KM3NeT, which is operating now with six detection units in ARCA and also six at ORCA. KM3NeT is now ready to sustain mass construction of the apparatuses at the two sites.

Stay tuned: next sea campaigns for ARCA and ORCA are planned in a few months!

Control of the operation from the shore laboratory in Portopalo di Capo Passero (the operation was performed in full respect of the anti-COVID-19 safety measures). 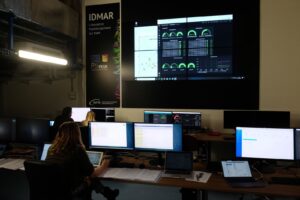 Overboarding of a detection unit: