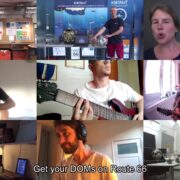 On 27 July 2020, the ORCA detector of KM3NeT reached a milestone: its first 6 strings were continuously taking data since 6 months. With two musical productions of the amazing talents in the KM3NeT Collaboration, the milestone  was celebrated.

Enjoy ‘6 strings, 6 months’, the song of the Route 66 of KM3NeT and an instrumental piece on 6 pianos by 6 players.

Both productions were recorded in corona times – at large distances between the performers.