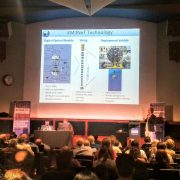 14 July 2016 – Last week, KM3NeT researchers have participated in the biannual get together of neutrino physicists at the 27th International Conference on Neutrino Physics and Astrophysics, Neutrino 2016 in London, England.

On Monday, July 4th, in the session about neutrino astronomy, Antoine Kouchner (Astroparticle and Cosmology, Paris, France) presented the latest results from the ANTARES neutrino telescope and highlighted the capabilities of the KM3NeT/ARCA detector for neutrino astronomy that will survey the neutrino sky with very broad coverage and unprecedented angular resolution.

On Wednesday, July 6th, in the session about future neutrino oscillation experiments, Paschal Coyle (Center for Particle Physics of Marseille, France) presented the excellent potential of the KM3NeT/ORCA detector for the determination of the neutrino mass hierarchy using atmospheric neutrinos, as well as its ability for precision measurements of the θ23 and Δm232 oscillations parameters. He also showed preliminary performances obtained from the two detection units of ARCA operational at the KM3NeT-It site.

The KM3NeT technical design and the performances of its ARCA and ORCA detectors are described in detail in the recently published Letter of Intent for KM3NeT 2.0.

The following KM3NeT posters were also presented at Neutrino 2016: