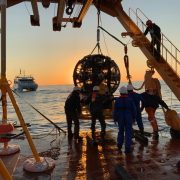 28 May 2019 – The KM3NeT/ORCA detector is now running with two detection units. The two units were installed during a recent deployment campaign. The KM3NeT researchers are eagerly analysing the recorded signals, while preparing the deployment of a further set of detection units.

For deployment, the units are packed in a compact configuration and lowered the 2.5 km from the deployment vessel to the sea floor. Using an acoustic system based on a set of acoustic transponders anchored on the sea floor, they are positioned to within 1 m of their nominal position. After connection to the sea floor network, a ROV triggers the detection unit to unfurl to its vertical position. For ORCA, the units are horizontally spaced by 20-23 m from each other. Vertically, the optical light sensors are attached to the unit with a spacing of about 9 m.

In addition to the two units for neutrino research, also a sea science instrumentation module was installed. This unit, built by the technical division of INSU for EMSO-France, hosts sensors that provide real-time monitoring of a variety of environmental parameters including temperature, pressure, conductivity, oxygen, turbidity and sea current. The module also incorporates an acoustic modem that, in the near future, will communicate acoustically with an autonomous ‘Albatross’ line; an instrumentation line dedicated to the oceanographic studies of the full 2.5 km water column.