Letter of Intent for KM3NeT 2.0

28 January 2016: Today, scientists of the KM3NeT Collaboration have publicly announced KM3NeT 2.0, their ambition for the immediate future to further exploit the clear waters of the deep Mediterranean Sea for the detection of cosmic and atmospheric neutrinos. The published Letter of Intent details the science performance as well as the technical design of the KM3NeT 2.0 infrastructure.

Rosa Coniglione, KM3NeT Workgroup leader HE Astrophysics: ”The combination of the cost effective design of the ARCA detector of KM3NeT and state-of-the-art reconstruction software allows for efficient detection of all three neutrino flavours from cosmic origin in a few years.”

Antoine Kouchner, KM3NeT Workgroup leader LE Physics: “With the densely instrumented ORCA detector of KM3NeT we will be able to determine the relative ordering of the neutrino masses, also referred to as the neutrino mass hierarchy.”

Uli Katz, KM3NeT Physics and Software manager: “The modular design of KM3NeT with detector blocks for the telescope makes it possible to swiftly react on new scientific developments. With KM3NeT 2.0 we are able to not only perform all-flavour neutrino astroparticle physics but also advance fundamental neutrino particle physics.” 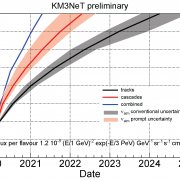 The scientific potential of the ARCA detector of KM3NeT. On the x-axis the year of operation of ARCA starting in 2020. On the y-axis the significance for observing the cosmic neutrino flux reported by the IceCube Collaboration (picture from the Executive summary of the Letter of Intent for KM3NeT 2.0). 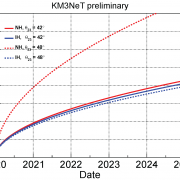 The scientific potential of the ORCA detector of KM3NeT. On the x-axis, the year of operation of ORCA starting in 2020. On the y-axis, the significance to determine the neutrino mass hierarchy using ORCA (picture from the Executive summary of the Letter of Intent for KM3NeT 2.0).