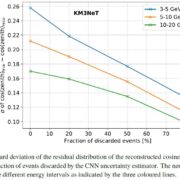 12 October 2020 – The KM3NeT Collaboration has published a new paper that aims at demonstrating the general applicability of deep convolutional neural networks to neutrino telescopes, using simulated datasets for the KM3NeT/ORCA detector as an example. To this end, the networks are employed to achieve reconstruction and classification tasks that constitute an alternative to the analysis pipeline presented for KM3NeT/ORCA in the KM3NeT Letter of Intent. They are used to infer event reconstruction estimates for the energy, the direction, and the interaction point of incident neutrinos. The spatial distribution of Cherenkov light generated by charged particles induced in neutrino interactions is classified as shower- or track-like, and the main background processes associated with the detection of atmospheric neutrinos are recognized. Performance comparisons to machine-learning classification and maximum-likelihood reconstruction algorithms previously developed for KM3NeT/ORCA are provided.

The conclusion is that this application of deep convolutional neural networks to simulated datasets for a large-volume neutrino telescope yields competitive reconstruction results and performance improvements with respect to classical approaches.