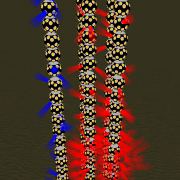 19 August 2019 – Since this spring, the KM3NeT telescopes are routinely operating with five detection units: four at the ORCA site, one at the ARCA site. First data results have been reported on the international conferences and workshops.

For the ORCA detector, off shore the French Provencal coast, four units were installed and connected to the seabed network. An earlier deployed unit was damaged during inspection and had to be recovered for repair in the labs of the Collaboration. It will be re-deployed in a next sea campaign. Also during the Spring-campaigns, three autonomous acoustic beacons were deployed at the seabed in the vicinity of the ORCA array. They are used for acoustic positioning of the optical modules in the detection units that move with the slowly varying deep sea currents. Sea campaigns for further expansion of the ORCA detector are scheduled after the summer break.

Offshore Sicily at the site of ARCA, after a fix of the seabed network, a detection unit that was deployed three years ago, could be revived and is again taking data since. Currently, the seabed network is being re-designed to allow for the extension of the ARCA detector to more than 200 detector units. The successful though temporary fix of the existing network makes connection of more detection units possible, while waiting for the implementation of the upgraded network. 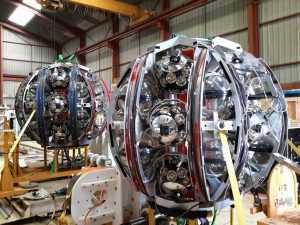 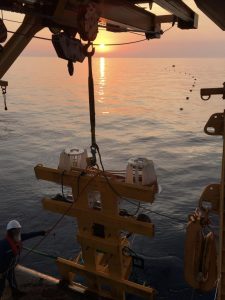 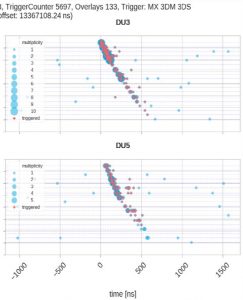 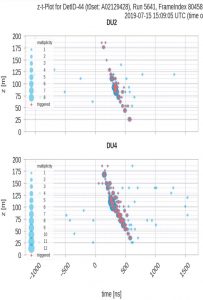 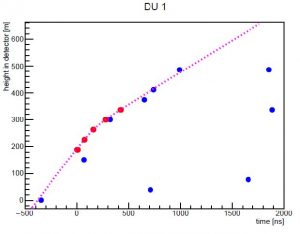 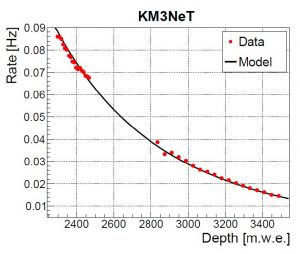 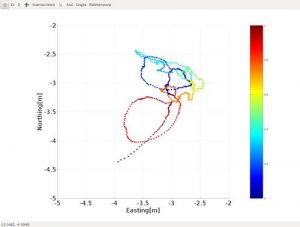 Differences between ARCA and ORCA

The technology used for the ARCA and ORCA detectors is  almost identical, but the difference in volume and height of the detectors and the density of optical modules in the detectors are strikingly different.  When finished, the volume of ARCA  will be more than 100 times larger then that of ORCA. ARCA will have a volume of about 1 Gton and ORCA ‘only’ about 8 Mton, while the number of optical modules in ARCA will only be twice that of ORCA: about 4000 vs about 2000. Consequently,  module density in ORCA will be about five times larger than that in ARCA. How is that achieved? In both detectors, eighteen optical modules are attached to each vertical detection unit. In ARCA, the distance between the lowest and the highest module is about 600. In ORCA this is about 150 m. Also the horizontal spacing between detection units is different: about 90 m in ARCA vs about 20 m in ORCA. Although, ARCA will have only twice the number of detection units, its foot print on the sea bed is much larger  that that of ORCA.

The geometrical differences reflect the main scientific purpose for which the detectors will be used. These are also visible in the first character of their names: ARCA stands for ‘Astroparticle Research with Cosmics in the Abyss’. The sparsely instrumented detector is optimised for the detection of high-energy cosmic neutrinos from distant sources in the Universe. ORCA is the acronym for ‘Oscillation Research with Cosmics in the Abyss’. The more densily instrumented detector is optimised to measure lower energy neutrinos,  thus providing data for the study of neutrinos oscillating between the three known neutrino flavours. The words ‘in the Abyss’ refer to the locations of the detectors several kilometres deep in the Mediterranean Sea.