Liveblog about the ongoing sea operation for ARCA

10 September 2021 – In the evening of September 10, five new detection units of KM3NeT, onboard the Handin Tide, will sail from Malta headed to the KM3NeT/ARCA detection site. This site is located 80 km off the coast of Capo Passero, Sicily (Italy). During a 1-week operation, the detection units will be deployed and connected to the ARCA neutrino telescope at 3,500 m depth, adding up to the six already in operation.

The expectation is high for this new, important step in the construction of KM3NeT. Despite the pandemic, the Collaboration has worked hard to keep the high integration speed needed for such an ambitious project. The detection units include components prepared in various European laboratories, and also the integration, testing and installation of the units on their deployment vehicles was a joint effort of many different KM3NeT teams.

As we write this note, the detection units are safely restrained on the deck of Handin Tide, the ship crew and the KM3NeT offshore team are onboard and ready, and the ship is about to set sail. Onshore, everything is ready in the control station in Portopalo di Capo Passero. The motivation, everywhere, is very high.

We look forward to several days packed with hard work and documented with extraordinary images from the sea surface and the deep sea.

Follow the action while it takes place through our social media channels and our ARCA-blog! 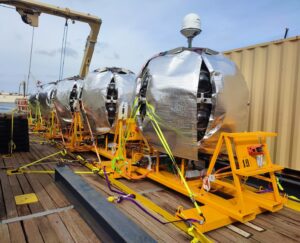 The detection units awaiting deployment on the deck of Handin Tide. Note that the equipment has been already prepared in the order in which it will be moved off the ship: first, two tripods carrying an acoustic beacon each (partially visible in the picture) for the acoustic positioning system, then the reels carrying long cables for connection to the existing submarine network on the sea floor, then the detection units.

The navigation to the KM3NeT site is estimated to take about 10 hours.

The weather forecast is good. The activity on site will start early morning tomorrow.