An inspiring collaboration meeting in Rome

The venue was Centro Ricerche Enrico Fermi, at the historical building where Enrico Fermi and his team made surprising discoveries in the ’30s. The site is also well known for a prestigious physics conference which was hosted there in 1931 and represented a milestone for nuclear research for decades. What a source of inspiration that was! It is in fact after a suggestion of Enrico Fermi that the neutrinos, those elusive particles which are the main subject of research of KM3NeT, were named so. He also formulated the first theory of weak interactions including neutrinos.

During the meeting we reviewed the progress in data analysis and in the construction of the ARCA and ORCA detectors. We also refined the plans for two new funding projects which are about to start in France and Italy – NEUMED and KM3NeT4RR – which will allow for significant extention of the two detectors.

Our management team was elected for a second two-year mandate.

With many thanks to our colleagues of La Sapienza University and INFN Rome for an excellent organisation! 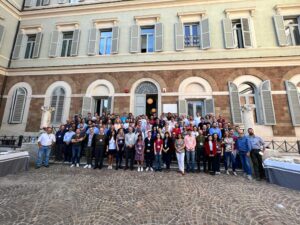