Fifty years ago, in 1972, the first neutrino conference was held in Hungary, because the organisers were not satisfied with the subdued position of neutrino interactions at the international conferences at that time. Nowadays, the neutrino conference is one of the major conferences in neutrino (astro)particle physics. Neutrino2022 took place in virtual Seoul, 30 May-4 June, 2022 and of course KM3NeT was there to show the results of data taking with the first detection units of ARCA and ORCA.

Aart Heijboer, physics coordinator of KM3NeT, showed the results of one year of data taking with ORCA6 and 100 days with ARCA6. The ‘6’  refers to the number of detection units in a detector used in the data analysis.

The ORCA detector is optimised to measure the oscillation parameters of neutrinos travelling through the Earth. Neutrino oscillation is a quantum mechanical phenomenon in which a neutrino created with a particular flavour – electron, muon or tau neutrino – can be later measured to have changed its flavour. In figure 1 below, it is evident that the data does NOT follow the flat blue horizontal line indicating the absence of neutrino oscillations. In other words, already with only six detection units, the ORCA6 detector ‘sees’ oscillations. In the second figure two oscillation parameters are plotted against each other. Clearly, the contour of ORCA6 is still wider than that of other experiments. More data with more detection units will make it narrower. 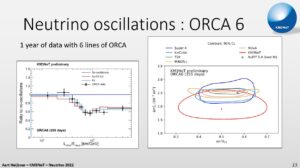 Also the ARCA detector, optimised for the search of high energy neutrinos from sources in the Universe, is well underway pushing the limits of the potential to discover sources of neutrinos down towards the expected limits of the full detector. 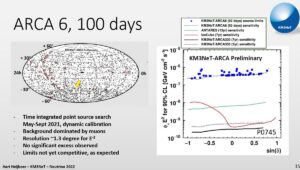 In the poster sessions KM3NeT physicists presented the details of many analyses being performed with the ARCA and ORCA detectors.

Aart Heijboer concluded at the plenary session that ARCA and ORCA will span eight decades in energy, that there is a rich variety of data analyses going on in the collaboration and that construction of the detectors is ramping up. Promising conclusions.

Very nice to have been invited to share the progress of KM3NeT with the community of neutrino (astro)physicists!

The KM3NeT Collaboration thanks the organisers of Neutrino2022 for an excellent edition of the conference. See you in two years time in Milano. 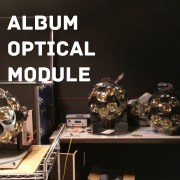