On 22 September 2017, after a two day long sea operation, the first detection unit of the ORCA neutrino telescope came online. This marks an important milestone of the scientific and technological endeavour of the international KM3NeT Collaboration.

Located in the Mediterranean Sea at a depth of 2437m and 40km offshore from Toulon, France, the ORCA telescope together with its sister telescope ARCA, located offshore from Sicily, will allow the scientists of KM3NeT to study the fundamental properties of the neutrino elementary particle and perform neutrino astronomy, mapping the high-energy cosmic neutrinos emanating from cataclysmic events in the Universe.

Neutrinos are the most elusive of elementary particles and their detection requires the instrumentation of enormous volumes: the KM3NeT neutrino telescopes will occupy more than a cubic kilometre of seawater. KM3NeT comprises a network of several hundred vertical detection units – strings anchored to the seabed and kept taut by a submerged buoy. Each string hosts 18 light sensor modules equally spaced along its length. In the darkness of the abyss, the sensor modules register the faint flashes of Cherenkov light that signal the interaction of neutrinos with the seawater surrounding the telescope.

Paschal Coyle, KM3NeT’s physics and software manager, explains, “The ghostly neutrinos are notoriously difficult to detect. Once completed, the densely instrumented ORCA detector will catch hundreds of thousands of neutrinos resulting from cosmic ray interactions in the Earth’s atmosphere. This will allow us to determine which of the three types of neutrinos is the heaviest; a fundamental open question in particle physics.“

Els Koffeman, technical project manager of KM3NeT, remarks, “The large depth of sea water shields the telescope from particles created by cosmic rays in the atmosphere above the telescope. Constructing such a complex infrastructure at these depths and pressures is a tremendous technical challenge. For the sea operations we profit from the concentration of marine expertise in the Toulon region. We use a state-of-the-art acoustic positioning system to locate the detection units on the seafloor with sub-metre precision.”

Once the electrical and optical connections to the shore station in La Seyne-sur-Mer were confirmed, the go ahead was given to trigger the unfurling of the detection unit to its full height. During this process, the deployment frame is released from its anchor and floats towards the surface while slowly rotating. In doing so, the string unwinds, eventually leaving behind a vertical detection unit with a height of about 200 m kept vertical by the submerged buoy at the top. The unit was then powered on from the shore station and the data from the 558 light sensors inside its 18 sensor modules started streaming to shore. Almost immediately the trajectories of down-going muon particles, resulting from cosmic ray interactions above the detector, were reconstructed from the recorded light signals: the first detection unit of ORCA is online.

Mauro Taiuti, spokesperson of KM3NeT, looks forward: “The successful operation of the first ORCA detection unit is another major step forward for the KM3NeT project. Now it’s full steam ahead with the construction of the hundreds of detection units to be deployed at the two telescope sites in the French and Italian Mediterranean Sea.”

Institutes of the KM3NeT Collaboration:

Attached and also available from: …… 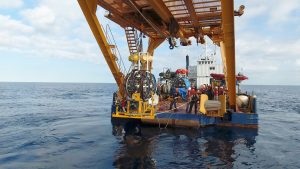 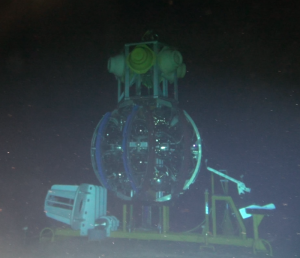 The KM3NeT/ORCA detection unit still around its spherical deployment frame anchored at the seabed at 2437 m depth. (Credits: COMEX) 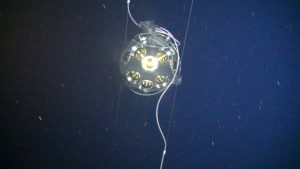 Representation of light from a passing down going muon particle recorded by the KM3NeT/ORCA detection unit. The colour represents the time of recording (yellow earlier than green, blue, red and magenta). The cones represent the direction and intensity of the light recorded by the light sensors inside the 18 modules of the detection module. (Credits: KM3NeT Collaboration)