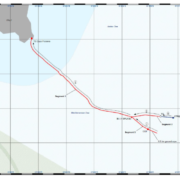 21 December 2020 – Just in time for the winter break, a nice Christmas present was delivered to KM3NeT:  the second main cable between the ARCA detector site and the shore station in the lovely village of Porto Palo di Capo Passero at the isle of Sicily, Italy has been installed. It is an important step in the program of upgrading the ARCA seafloor network for the ARCA detector near Sicily, Italy.

For the cable it was a long journey which started on November 6th in Calais, France. There it was loaded from the Alcatel Submarine Network plant onto the cable layer Pierre de Fermat of Orange Marine/Eletta. Two weeks later it was successfully installed at the seabed and the shore end was safely put on a new beach man hole near the shore station on Sicily. Tests of the optical fibres and copper conductors inside the cable were perfectly in agreement with design specifications.

The cable comprises 48 optical fibers for data transmission and detector control. Two copper conductors provide the detector with electrical power. At about 96 kilometer from shore the cable is split in two branches (see figure). The northern branch will be used to serve one part of the ARCA detector, the southern branch the other part.

Also the  power equipment in the ARCA shore station has been upgraded and can now provide 80 kW DC power. End of 2021, a cable termination frame will be connected to the northern branch with 16 sockets for the connection of detector units by ROVs.

Thanks to the crew of the cable layer Pierre de Fermat of Orange  Marine/Elettra!

Thanks to the IDMAR project in Italy!

Pictures below show the arrival of the cable at the shore near the ARCA station. 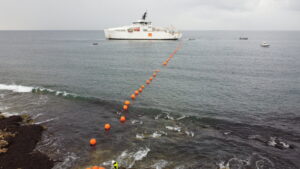