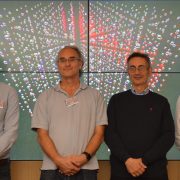 In a few months from now, at 1 February 2019, the new management team will take over from the current one for a term of two years. Mauro Taiuti chairs the team as the Spokesperson (Director) of the KM3NeT Collaboration. He shares the tasks with Aart Heijboer, who is the Deputy Spokesperson. Miles Lindsey Clark is the Technical Project Manager and Paschal Coyle the Physics and Software Manager. Together they will lead the KM3NeT Collaboration of researchers and engineers in their endeavour of building the ARCA and ORCA neutrino detectors, taking data and searching with deep learning techniques and complex algorithms for signatures of neutrinos.

The KM3NeT Collaboration has great confidence in the team and congratulates all four members with their election! 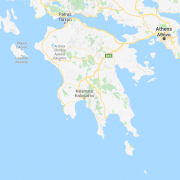 During November and December 2018, KM3NeT will follow with great interest the sea operations of the finalists of the Shell Ocean Discovery XPRIZE.

The Shell Ocean Discovery XPRIZE is a global competition for innovation in deep sea technology. The challenge for the nine teams in the final competition is to explore and map within 24 hours and with a resolution of at least five metres a large area of the seafloor of the Mediterranean Sea, off-shore the city of Kalamata on the Peleponnese  peninsula of Greece.

The selected area is about 500 km2 with depths up to 4000 m. The teams must explore at least 250 km2 of the area with their self-developed autonomous technology. The autonomous devices will be launched from a control centre in Kalamata, where they must be recovered again at the end of their explorative mission.

Fortunately for KM3NeT the selected area includes the future third installation site of KM3NeT. The high-resolution bathymetric map resulting from the measurements of the finalists will be made available to NCSR-Demokritos, one of the founding partners of KM3NeT and the managing institute of the KM3NeT-Gr installation site. The high-resolution map is a fantastic contribution to the implementation of the KM3NeT-Gr site.

The KM3NeT Collaboration wishes all finalists good luck in their challenging endeavour! 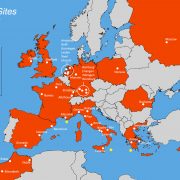 On Friday 21st of September 2018, a cooperation agreement was signed between the Iv. Javakhishvili Tbilisi State University (TSU) and the KM3NeT Collaboration. During a ceremony in Tblisi, Georgia, George Sharvashidze, Rector of TSU, Mikheil Nioradze, Director of the Institute of High Energy Physics and Christos Markou, Chair of the KM3NeT Institutes Board signed the agreement that confirmed the accession to the KM3NeT Collaboration of the group led by Prof. Revaz Shanidze. 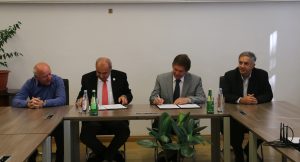 KM3NeT congratulates the researchers of the IceCube Collaboration for their compelling evidence for high-energy neutrinos originating from blazar TXS 0506+056.

On 22 September 2017, the IceCube neutrino telescope detected a high-energy neutrino of about 290 TeV passing through the deep South Pole ice. When a series of gamma-ray telescopes looked at the same location in the sky they identified a blazar, TXS 0506+056, which happened to be flaring at that moment. In addition, IceCube found an excess of high-energy neutrino events with respect to atmospheric backgrounds at that location between September 2014 and March 2015. Details of the IceCube results can be found at their website.

The ANTARES neutrino telescope in the deep Mediterranean Sea followed up the initial IceCube real-time alert, but no time coincident events were found. However, a time integrated search during the period 2007-2017, did yield a small excess of neutrinos in that direction. Have a look at their website for details.

The first identification of an astrophysical source of high-energy neutrinos represents an important step forward for the fledgling field of multi-messenger astronomy. With its unprecedented angular resolution and complementary field of view, KM3NeT looks forward to soon joining IceCube and ANTARES in the hunt for the enigmatic sources of cosmic neutrinos. Exciting times are ahead of us!

In this artistic rendering, a blazar is accelerating protons that produce pions, which produce neutrinos and gamma rays. Neutrinos are always the result of a hadronic reaction such as the one displayed here. Gamma rays can be produced in both hadronic and electromagnetic interactions.

Characterisation of photomultipliers for KM3NeT 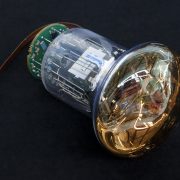 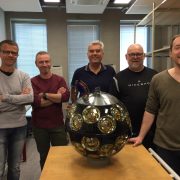 The KM3NeT team of the Neutrino group of Subatech, Nantes in France, participates to the instrument construction by taking in charge a part of the integration of the optical sensor modules. These modules are instrumented glass spheres with a diameter of 42 centimetre, equipped with 31 photo-multipliers and the control and acquisition systems.  They are themselves integrated in groups of 18 to form detection units. Ultimately, with many KM3NeT institutes working together on producing the units, a total of 115 and 230 detection units will make respectively the ORCA and ARCA detectors accounting for more than 6000 optical modules. The picture shows the team of Subatech in Nantes with their first optical sensor module of a long series.

KM3NeT is very happy to welcome to the Collaboration it’s newest institute and a new continent, the Western Sydney University, Australia. Led by Professor Miroslav Filipovic, director of the UWS Penrith Observatory, the group has considerable expertise in gamma and radio astronomy. 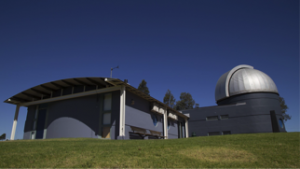 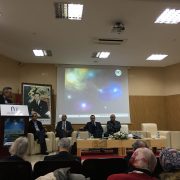 With the implementation of the production line the Morrocan groups in KM3NeT significantly contribute to the construction of KM3NeT. 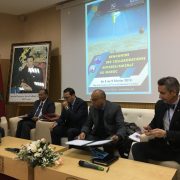 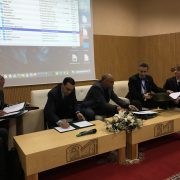 KM3NeT celebrates International day of women and girls in science 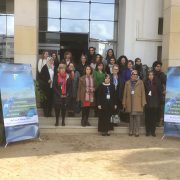 END_OF_DOCUMENT_TOKEN_TO_BE_REPLACED

Measuring waves in the deep-sea 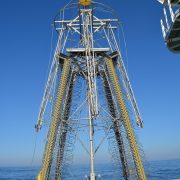 22 November 2017  – Geophysicists of  NIOZ Royal Netherlands institute for sea research and members of the KM3NeT Collaboration, have successfully anchored a unique 3D array with 550 high-resolution temperature sensors at the KM3NeT-Fr site, about 40 km offshore Toulon.  The device was anchored using the Ifremer/Genavir ship l’Atalante.

With  this device geophysicists in KM3NeT will study the motion of the Mediterranean Sea at a depth of about 2500 m. The deep sea is constantly in motion and waves develop supported by stable water layers. These internal waves in the deep sea are much slower than the waves at the surface, but are much higher: 10 m up to more than 100 m.  With the NIOZ device the turbulence and wave breaking in the deep sea can be measured with high precision. 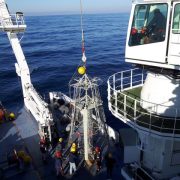 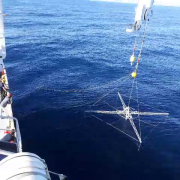 See for an earlier deployment of the 3D sensor device the video below. First it shows the deployment of the top of the line with a.o. orange buoys. This is followed by a fascinating interplay of people pulling strings at the right time to unfold the structure. Once the structure is unfolded it is connected to the top  of the string before descending to the seabed.