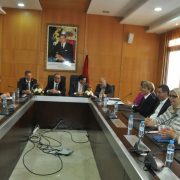 26 September 2016 – Last week, on Friday 23 September 2016 an important ceremony for KM3NeT took place at the Ministry of Higher Education and Scientific Research and Executive Training (MESRSFC) in Rabat, Morocco.  In the presence of several high-level representatives of all organisations involved and KM3NeT scientists an agreement was signed to establish a production line for KM3NeT optical modules in Morocco. The agreement was signed by Mr. Mohamed Abousalah, Secretary General of MESRSFC; Mr. Saaid Amzazi, President of the Mohammed V University in Rabat, Mr. Mohammed Benkaddour and Maarten the Jong, Spokesperson of the KM3NeT Collaboration.

The Universities in Oujda and Rabat and  the National Centre for Energy Science and Nuclear Techniques (CNESTEN) in Rabat are partner institutes in the KM3NeT Collaboration. They will implement a production line to produce in the course of five years several hundreds of optical modules for KM3NeT. This is a considerable contribution to the realisation of the KM3NeT neutrino telescopes in the Mediterranean Sea.