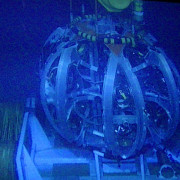 07 May 2014: The first KM3NeT detection was put into operation at the KM3NeT-It installation site, 100 km off the coast of the South East of Sicily, at a depth of 3500 m. Since more than a year, the first KM3NeT optical module is already operational inside the ANTARES telescope, situated close to the KM3NeT-Fr installation site, 40 km south of Toulon at a depth of 2400 m. With the successful completion of these two important technological steps at two different installation sites, the realisation of the first phase of the distributed KM3NeT neutrino telescope is well on its way. KM3NeT-Press release 2014-05-11